Learn a new skill online on your time

React Firebase storage Upload and save url to firestore

In this tutorial, we'll talk about How to Upload Image to Firebase Storage and save URL to Firestore in React.js?. The users to upload images, files and data will be stored on Firebase Cloud Storage bucket. Scroll ...
Read More

In this article, we will look at how to upload Multiple Images And Store them In a Database Using PHP And MySQL. First, let's create an HTML form to upload multiple images or files to store the ...
Read More 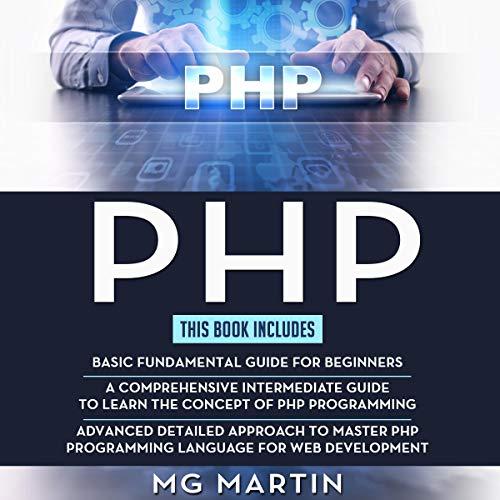 Discover the power of PHP as you take your web development skills to the next level.

PHP is the most common programming language for server-side web development.

One of the best things about this language is that it is fairly easy to learn.

This book will cover all from beginners, intermediate, and advanced strategies to enhance your PHP skills.

Inside you will find and discover all you need:

How you can set up your PHP environment to create your first PHP program
How you can easily input PHP values for web users
Learn more about operators, expressions, arrays, and the variables in PHP
Discover the power of conditional statements
Discover how to insert, delete, and update data in a database
Learn how to secure your passwords in PHP
How to build a complete member registration system
PHP: A Comprehensive Intermediate Guide to Learn the Concept of PHP Programming

How to use restful APIs in PHP
Create PHP graphics
How to read, write, append, and delete files in PHP
How you can prevent hackers from intruding your site
Discuss PHP sessions and cookies
Advanced OOP-classes, methods, and objects
PHP: Advanced Detailed Approach To Master PHP Programming Language for Web Development

Are you ready to launch your PHP coding skills to the next level?

END_OF_DOCUMENT_TOKEN_TO_BE_REPLACED 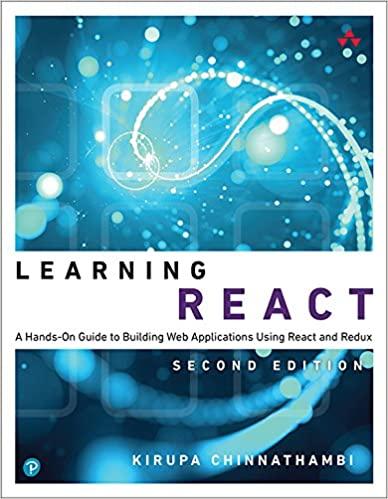 Learning React A hands-on guide to building web applications using React and Redux
As far as new web frameworks and libraries go, React is quite the runaway success. It not only deals with the most common problems developers face when building complex apps, it throws in a few additional tricks that make building the visuals for such apps much, much easier.

What React isn’t, though, is beginner-friendly and approachable. Until now. In Learning React, author Kirupa Chinnathambi brings his fresh, clear, and very personable writing style to help web developers new to React understand its fundamentals and how to use it to build really performant (and awesome) apps.

The only book on the market that helps you get your first React app up and running in just minutes, Learning Reactis chock-full of colorful illustrations to help you visualize difficult concepts and practical step-by-step examples to show you how to apply what you learn.

Build your first React app
Create components to define parts of your UI
Combine components into other components to build more complex UIs
Use JSX to specify visuals without writing full-fledged JavaScript
Deal with maintaining state
Work with React’s way of styling content
Make sense of the mysterious component lifecycle
Build multi-page apps using routing and views
Optimize your React workflow using tools such as Node, Babel, webpack, and others
Use Redux to make managing your app data and state easy

Contents at a Glance
1 Introducing React

8 Dealing with State in React

9 Going from Data to UI in React

13 Setting Up Your React Dev Environment

14 Working with External Data in React

16 Creating a Sliding Menu in React

END_OF_DOCUMENT_TOKEN_TO_BE_REPLACED 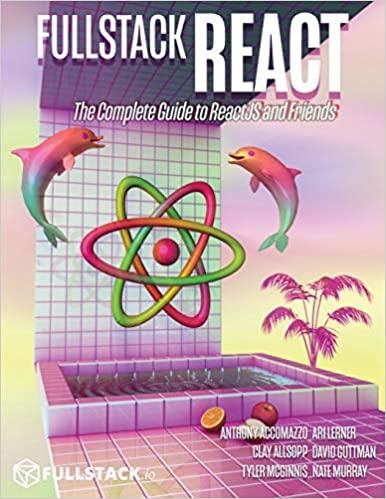 Fullstack React: The Complete Guide to ReactJS and Friends

There are so many incorrect, confusing, and out-of-date blog articles

One tutorial says one thing and another says something completely different.

There are too many options

There are fifty different boilerplates and a dozen different Flux implementations. Which one is best?

What if you could master the entire framework in less time, with solid foundations, without beating your head against the wall? Imagine how quickly you can get all of your work done with the right tools and best practices.

Seriously, let’s stop wasting time scouring Google, searching through incorrect, out-of-date, blog posts and get everything you need to be productive in one, well-organized place, complete with both simple and complex examples to get your app up and running.

You’ll learn what you need to know to work professionally and build solid, well-tested, optimized apps with ReactJS. This book is your definitive guide.

END_OF_DOCUMENT_TOKEN_TO_BE_REPLACED 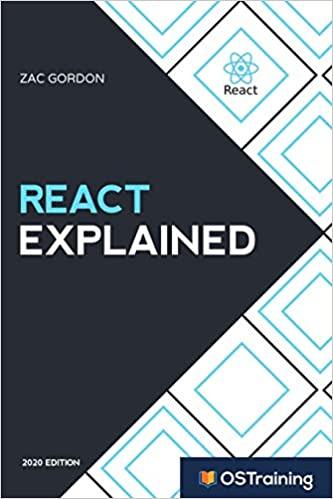 React Explained is a fun and enjoyable introduction to React, which is the Javascript framework of choice for WordPress, Drupal, Magento, and thousands of developers.
Key Features
Up-to-Date: Constantly updated, the material in React Explained is always current.
Clear instruction: You will follow plain English, clear visuals, and enjoyable step-by-step instructions.
Hands-on learning: You will master React by building a complete React application.

What You’ll Learn
In React Explained, readers will dig deep into how React works and will learn how to build applications with it. While the focus is on building for the frontend on the web, many of the skills you will learn will also apply to writing React on the server side, for native applications and even for Virtual Reality environments.

About the Author
Zac Gordon is a professional educator, who currently focuses on JavaScript development with and alongside WordPress at javascriptforwp.com. Zac has years of experience teaching at high schools, colleges, bootcamps and online learning sites like Treehouse, Udemy and Frontend Masters. In addition to teaching, Zac also runs Web Hosting for Students, one of the world’s largest hosting companies dedicated to students and teachers. You can also catch his free Office Yoga sessions on OfficeYoga.tv.

END_OF_DOCUMENT_TOKEN_TO_BE_REPLACED 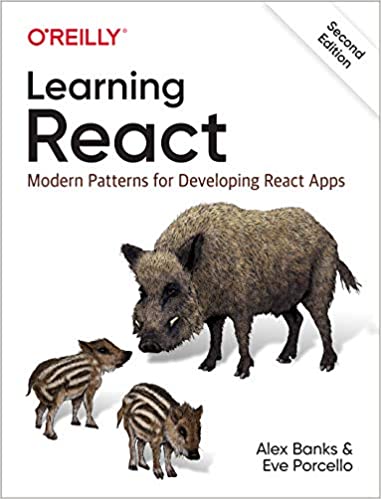 If you want to learn how to build efficient React applications, this is your book. Ideal for web developers and software engineers who understand how JavaScript, CSS, and HTML work in the browser, this updated edition provides best practices and patterns for writing modern React code. No prior knowledge of React or functional JavaScript is necessary.

With their learning road map, authors Alex Banks and Eve Porcello show you how to create UIs that can deftly display changes without page reloads on large-scale, data-driven websites. You’ll also discover how to work with functional programming and the latest ECMAScript features. Once you learn how to build React components with this hands-on guide, you’ll understand just how useful React can be in your organization.

END_OF_DOCUMENT_TOKEN_TO_BE_REPLACED 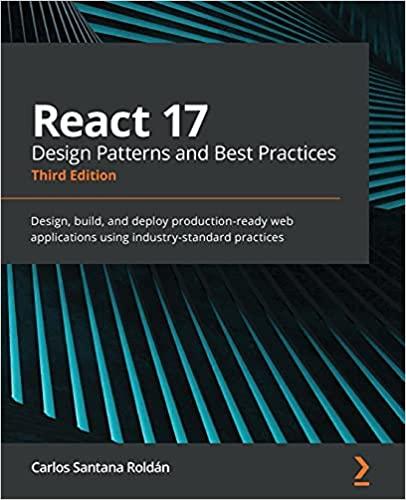 Key Features
Get up to speed with design patterns in React such as render props and controlled and uncontrolled inputs
Become well-versed with React Hooks in this updated third edition
Work through examples that can be used to create reusable code and extensible designs
Book Description
React is an open-source, adaptable JavaScript library for building complex user interfaces (UIs) from small, detached bits called components. This book will help you to use React effectively to make your applications more flexible, easier to maintain, and improve their performance, while giving your workflow a huge boost by improving speed without affecting quality.

You’ll start by understanding the internals of React, before gradually moving on to writing maintainable and clean code. The chapters that follow will show you how to build components that are reusable across the application, structure applications, and create forms that actually work. Later, you will build on your knowledge by exploring how to style React components and optimize them to make applications faster and more responsive. Finally, you’ll write tests effectively and learn how to contribute to React and its ecosystem.

By the end of this book, you’ll be able to avoid the process of trial and error and developmental headaches, and instead, have the skills you need to efficiently build and deploy real-world React web applications.

What you will learn
Get to grips with the techniques of styling and optimizing React components
Create components using the new React Hooks
Get to grips with the new React Suspense technique and using GraphQL in your projects
Use server-side rendering to make applications load faster
Write a comprehensive set of tests to create robust and maintainable code
Build high-performing applications by optimizing components
Who this book is for
This book is for web developers who want to increase their understanding of React and apply it to real-life app development. Intermediate-level experience with React and JavaScript is assumed.